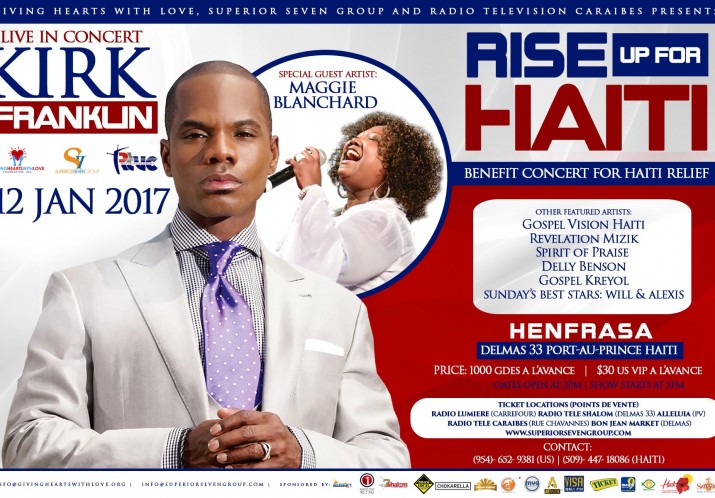 In 2010 a 7.0 magnitude earthquake rattled the foundation of Haiti leaving behind nothing short of destruction in the already poverty stricken country of Haiti. An estimated 3,500,000 people were affected, with 220,000+ deaths, 300,000+ injuries, and approximately 1.5 million people were instantly homeless. Today, almost seven (7) years later, Haiti is still struggling to rebuild its nation but found itself one again in nature’s path on October 4th, 2016. Packing some 145 mph winds and torrential rainfall, the unwanted Hurricane Matthew, ripped through the southern portion of Haiti taking with it over 1,000 lives, 200,000 plus homes, and the hope of the Haitian people.

On January 12, 2017, the 7th anniversary of the earthquake in Haiti, Giving Hearts with Love Foundation has lined up a monumental event at Centre Sportif Henfrasa in Port-au-Prince, Haiti, that will help memorialize that day in Haiti’s history, while also sharing the hope of ‘rising up’ that has continued to build the Haitian spirit throughout the years. “Rise Up for Haiti’ will unite the community for a day of inspiration and empowerment and showcase the resilience of the Haitian people, while sharing the love of Jesus Christ, and giving Haitians the peace, unity, love and hope they need to be reminded that they have not been forgotten, even now in the wake of Hurricane Matthew.

Through strength and perseverance, Haiti has continued to forge ahead, even in the midst of hardship, so a gospel concert of this magnitude will provide a platform for people all over the world, including a vast population of Haitian-Americans, to join Haiti as they commemorate this significant anniversary. Our hope is that the theme, ‘Rise Up For Haiti’ will be remembered as this international production graces the television sets and radio streams of viewers and listeners across the world on a day that has brought a tremendous amount of sorrow for the Haitian people. This concert will not only foster awareness, commemorate the anniversary of the earthquake and remember the lives of those lost, but it will also raise money to help rebuild the Haitian communities that desperately need our help.

Grammy Award winning gospel phenomenon, Kirk Franklin is known best as a gospel musician, choir director, and author whose vast resume includes a myriad of awards and collaborations with various artists. In January 2010, right after the earthquake, Mr. Franklin led a movement called “Artists United for Haiti,” where various artists shared their talents to raise funds for earthquake relief. Thus, Mr. Franklin has been giving his love and support to Haiti and it is only fitting that he headlines such a show.

From 5pm to 10pm on Thursday, January 12, 2017, Rise Up for Haiti, will attract 15,000 plus attendees from Haiti and the United Sates and will feature artists like Spirit of Praise from Atlanta, Sunday’s Best Will and Alexis, and Haitian gospel sensations Maggie Blanchard, Gospel Kreyol, Revelation Mizik, and Gospel Vision. Music uplifts and sheds light in the midst of darkness, and Giving Hearts with Love Foundation is excited to share something different with Haiti, while making this significant anniversary something to rejoice about because Haiti is still standing and will continue to Rise Up!